Something very suspicious was happening! It was early on a November morning, and my dad had taken me to the beach for a good run. I had met quite a few of my dog friends. My mood should have been really happy but I am a Lhasa Apso and we always know when something is up! I was suspicious.

Later on, after a long morning snooze, I spotted dad in the garden throwing all our rubbish onto a big heap at the bottom of the garden. There were old plants, small cardboard boxes and very large pieces of wood. It was a work of art actually because dad had built the structure really carefully. He stood back and admired his work. Come on dad! It’s just a pile of rubbish. Then, as usual, he strolled back indoors for a cup of tea. That’s humans for you. Work for a while and then have a long break.

Back in the garden, I caught sight of my two friends Trixie and Bella, the neighbourhood cats. They were sisters and they love to sit on our shed watching the comings and goings in the garden. Trixie told me once that our garden was much more exciting than her own. Usually she is the only cat I allow to sit on the shed but I was quite fond of Bella and had given her my permission as well.

“Hi Pops! I suppose you will be staying in tonight.” Trixie looked at Bella and laughed. “It’s far too dangerous for a little dog like you.”

Bella joined in and sarcastically repeated Trixie’s words. “Yes little Pops. Far too dangerous for you.”

It’s a funny thing about cats. They have a way of making you feel inferior. It’s just the look they give you. I wasn’t having any of it though and told them so. They just ignored me and sauntered off into their own garden. Another unpleasant trait of the cat. I walked back indoors to think things over but before I was able to make any sense of it all, my human sister arrived with her two little people. Now we would have some fun because that is what little people love to do. So I played all afternoon and only came in when it started to get dark.

Then the noises started! Loud bangs and whooshing sounds. They seemed to be everywhere and were very scary. I snuggled up to mum, hiding under my favourite blanket and she cuddled me and told me not to worry.

“I’ll stay in here with you, Poppy.” She said and cuddled me some more. All the others went out into the garden and watched as dad set fire to the rubbish. It was such a blaze. Then my brother took out a box of little stick things and set fire to them one by one. Some of the sticks made beautiful colours as they burned and others shot into the sky bursting into colour before fading into nothing. The little people laughed and jumped up and down with excitement. Eventually, they all came back indoors and mum made everyone a lovely snack. Of course, I was not forgotten and received a tasty treat myself.

The next morning, Trixie told me that it was Fireworks Night and it happens every year. Cats don’t like it either apparently.

“I’m sorry about yesterday, Poppy.” She said. “I hope we are still friends. That Bella is just a mischief-maker.”

Well. Forgive and forget. That’s what I say. 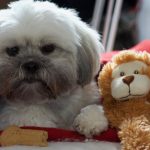