Curled up in my bed, I was blissfully sleeping when dawn broke. There was a chill in the air this morning with frost covering the whole garden. It was so cold that even Trixie the cat hadn’t risked an appearance. When I trotted downstairs, my parents were already up and dad was holding my lead. This was great news because I was about to go on a long autumn walk.

Mum had things to do and would not be coming with us today. Actually, she hates cold weather and rarely joins us on our regular jaunts into the countryside. I am a Lhasa Apso which means I can deal with very cold temperatures. To illustrate my point, I led dad out of the back door and down the garden to the bottom fence.

The wheelbarrow that I had used to jump over the fence the other night was still there but dad didn’t know anything about that. Of course, I wasn’t about to let on. Once in the forest, dad took off my lead and I was away. After chasing a few rabbits, I returned to dad and, in a sensible manner, walked with him through the trees. We passed the big mound of earth where I had once before met a mysterious black and white striped creature but there was no sign of it today.

“This is where badgers live, Poppy, but you won’t see them in the daytime because they will be sleeping.” Dad’s face lit up when he talked about nature. So the mysterious black and white creature is a badger according to my dad. Just then, I caught sight of a giant rabbit. At least, it looked like a rabbit but with longer ears and longer legs. This animal was really fast and I got ready for the chase. However, before I was able to move I heard a low growl and a loud barking noise. The feral dog emerged from the bushes but, on this occasion, I had no backup.

“Stay very still Poppy.” whispered dad. I did just that. This was a powerful looking animal although very lean and dirty. Dad called gently to the angry dog and crouched down on the forest floor. The dog seemed to understand and walked slowly towards him. I could see that his front paw was bleeding and he was limping. Dad gave the injured animal one of the treats he kept in his bag and it was devoured in seconds.

“This dog is starving, Poppy. We’ve got to get home right now.” Dad poured some water into his hand and the dog took a drink. He then attached my lead to the feral dog’s collar and led him home. Dad told mum that it was a German Shepherd which appeared to have been treated well in the past but was now suffering. Over the next hour, my new friend had a good bath and an even better meal. Mum was able to bandage his leg. The animal doctor will take care of him tomorrow.

Meanwhile, he was staying with us which pleased me very much. After all, I had originally thought that he was dangerous and had scared him off with the help of Trixie and Bella, my feline friends. Now, I felt really guilty because he had just been asking for help. When I looked in on him later, he was fast asleep on the rug. Perhaps he can stay with us forever. 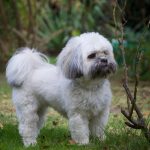 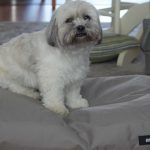 The story of bedtime