I watched the world go by from my vantage point in the long grass at the far end of the garden. It was still warm but the evening sky was darkening although I still had a good view of the meadow on the other side of our fence. I was expecting to be called indoors at any time now and kept looking back at the house for any sign of my dad.

When I looked to the side, I saw Trixie, the neighbourhood cat, sitting on the wall watching me. As I caught her eye, she pretended not to be interested and yawned in the way that only cats can yawn. A little while later, Harry the hedgehog rushed past me on the way to dad’s greenhouse. He called out to me as he raced by. “There’s trouble brewing tonight, Poppy. I can sense it. Is it alright to use the greenhouse again?” I nodded, although he didn’t usually ask these days. I think he spent most of his time in there now that it was much colder.

Feeling a little bored, I turned back to look at the fields. That’s when I saw it. An owl swooped through the night air like a stone. It was the same owl who had nearly snatched Harry a few weeks before. There was a thud and a high-pitched squeal before it rose triumphantly into the air clutching its prey, a tiny vole. I looked back at the greenhouse and spotted Harry with his face against the glass looking absolutely terrified. Trixie was still sitting on the wall but alert and ready for action. I have to say that I am not too keen on owls.

As I followed the owls path across the fields, I was astounded by what happened next. Another bird dropped out of the sky but at incredible speed. I have never seen anything move so fast. The creature slammed into the owl and both birds spiralled downward to the ground where I lost sight of them. Now, I am a Lhasa Apso and have got super sensitive hearing. Obviously, the owl was in a desperate struggle to escape its assailant. Eventually it did break free, flying back across the fields and away into the forest. Seconds later, the attacking bird came into view as it hovered in the breeze just above the meadow and looked around. Then it flew to a nearby tree and perched on a large branch overlooking the garden. The vole was nowhere to be seen and I rather hoped it had escaped during the attack.

I looked at the creature in more detail as it moved its head one way and then the other. It was mostly brown in colour with a strong body and a wickedly sharp beak. When it flew off it did so without any real effort. It just flapped its wings and disappeared into the night. I looked over at Trixie who had settled back on the wall looking up at the sky. We had both witnessed something tonight that we would probably never see again. I don’t know what sort of bird it was but it was powerful and not afraid to tackle an owl in flight. I would not forget this night in a hurry.

When I heard dad call me in, I trotted back down the garden looking in at Harry as I passed the greenhouse. He was settled into his little box and looked very comfortable and, more importantly, very safe.

There will not be another adventure for a few weeks but the Tales of a Lhasa Apso will be returning soon. 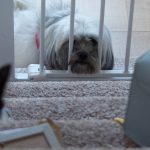 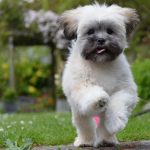 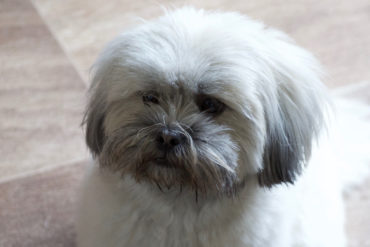